The Anatomy of a Flippa Scam

If you’ve checked out our (very thorough) guide to buying and selling websites, you’ll know that we feel very strongly that due diligence is the most crucial skill when it comes to website investing.

Today, we’re going to run through a couple of live examples that we found on the Flippa marketplace. The good thing about the vast majority of scammers is that they’re not really trying too hard to hide the fact that they’re selling trash.

The scammers don’t want smart, informed investors to bid on their auctions– they’re trying for the low hanging fruit. They want to attract inexperienced buyers who don’t know what they’re doing. It’s similar to the way the infamous ‘Nigerian Prince’ scammers purposely write bad emails – they only want the dumbest of the dumb to reply, and by writing their emails in broken English, they can guarantee that they’ll only get replies from the most gullible people. Flippa scammers work on the same principle – they only really want bids from people who genuinely can’t tell the difference between a proper website and a site that has no real traffic and no revenue.

Of course, there are exceptions, which is why thorough due diligence is so important. For today’s article, we’re going to explain how you can spot the Flippa listings that are blatantly scammy.

So, the first listing is this one

weddingflips.com – (I’m not going to link to it because it doesn’t deserve the link.)

The very first warning sign – this listing doesn’t even have a proper description. This is the extent of the Seller’s Notes – clearly he/she isn’t trying very hard.

The site was apparently established in June 2014, but the listing only has analytics data starting January 15.  That’s the first warning sign – if you weren’t opposed to Google Analytics on principle, why wouldn’t you install it from day 1? If you were genuinely trying to build a good site, surely you’d want to track your traffic.

Most people who don’t use Google analytics choose to do so because they’re worried about privacy. It doesn’t follow that someone would suddenly install Google analytics 2 months before they decide to flip a site. The only reason that makes sense is that the traffic is bought, and they’d rather buy traffic for 2 months rather than for 6 months, so  they install analytics at the same time that they start buying traffic.

Now, let’s take a quick look at the site itself.

Immediately, the design of the site is a problem. It’s ugly, and not in a retro way. Sometimes, there are sites that look outdated because they haven’t been redesigned in a while. But this site – we know that it’s relatively new, since it was established in June 2014. The theme looks totally generic and the header image is a disaster.

The thing that makes it completely obvious to me that this listing is a scam is the content. I don’t want to get hit with a duplicate content penalty, so I took a screenshot of the content on this site for your reading pleasure:

The content reads like it was written by someone without a firm grasp on English, then  translated into Russian via Google Translate and then translated back to English. It’s extremely likely that this content was generated by an article spinner, or bought as part of a Fiverr gig that offers 10,000 words for $5 or something.

It’s clear that whoever is selling this site has no interest in attracting legitimate website investors – his goal is to score a few hundred bucks from a beginner that doesn’t know any better.

Now, at this point we know this site is a scam – but we’ll keep going because we want to demonstrate some of the more basic ways of doing due diligence.

We’re going to use the SEOQuake toolbar (this is a free tool bar you can get it for Mozilla and Chrome). Open up the browser that you installed the toolbar in, go to the site weddingflips.com in that browser, and click on this button:

As you can see, the site is ranking #10 for the extremely lucrative KW ‘paintball party supplies’ which has an incredible 90 Search Volume per month (read: sarcasm).  All the other rankings are far from the first page, and all of the KWs listed seem to have pretty low search volume.

If we didn’t already know that this site was a scam, this SEMRush report would be a warning flag, especially since the site claims to get 3,300 unique visitors a month. Since the KWs listed in the report are all pretty low volume, and since the site doesn’t seem to be ranking of the first page for any KW, it’s highly unlikely that the 3300 unique visitors that the site is getting genuinely come from the search engines. And yet, the listing claims that the traffic is mostly organic.

The conclusion? The traffic is probably paid traffic masked as organic traffic. There are services/software out there that can mimic organic traffic – essentially, they get a bunch of bots (or possibly even people) to run Google searches on certain KWs and then click through to a specific site.

It’s very likely that if we were granted analytics access for this listing, we’d see that the source of the traffic was mainly organic. That’s why analytics can’t always be trusted – in this case, there is a clear inconsistency between the rankings the site has and the amount and type of traffic it claims, and that’s a red flag.

You should always be on the lookout for inconsistencies like this. As I’ve stated before, doing due diligence is almost like investigating a crime – the seller is telling you a story, and your goal is to poke holes in that story.

So, to sum up – the things that made me think this listing was probably a scam:

Here is the second listing.

Now, this whoever listed this site put a little bit more effort into it – and it’s paying off. This listing has a high bid of $910.

The Seller’s Notes are long and rambling, and you should read them. Always remember that you should always start from a place of skepticism when it comes to reading the Seller’s description/notes. At best, they’re exaggerating, and out worst, they’re lying outright. You can read the Seller’s notes on the listing or click on the thumbnail below. 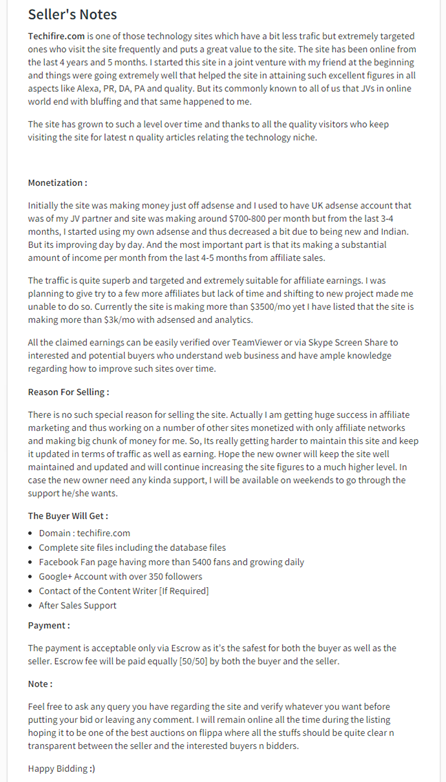 The seller has concocted an entire backstory for why he’s selling. I’ll put that aside as its mostly irrelevant. The important facts about this site that I noticed at a glance:

However, looking at the listing, I immediately spot something extremely suspicious. 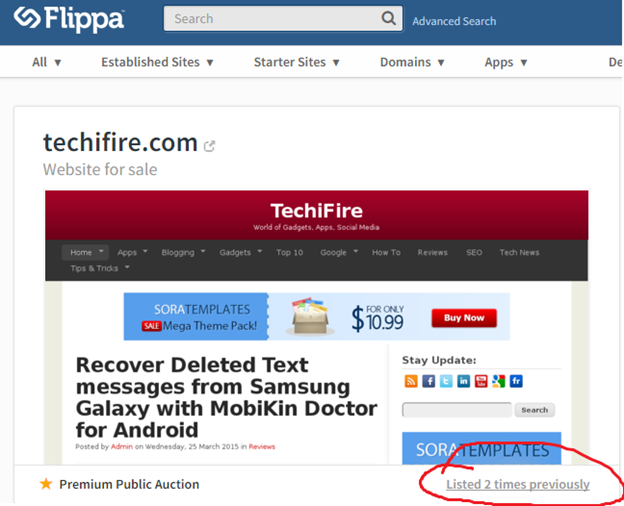 If you go to the listing and click through on this ‘Listed 2 times previously’, you’ll see that this site was listed twice by a different account. That account is now suspended. At this point, sirens should be going off in your head.

Occasionally, sites will be sold more than once on Flippa – but in these cases, there should be at least a year or two between listings. In this case, the site was listed once at the start of the year – around January – and once in March. This quick listing and re-listing tells me one thing: 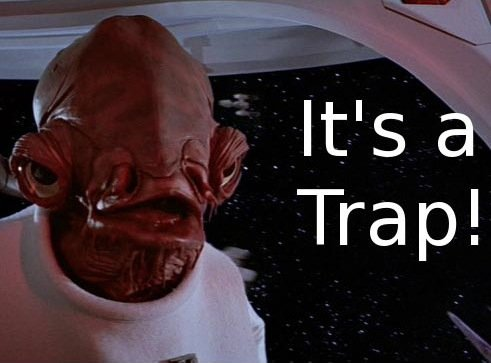 However, I’ll continue through my basic due diligence process for educational purposes.

The site itself actually doesn’t look terrible – it’s not winning any design awards, and it’s pretty generic, but it doesn’t hurt my eyes. The content on the other hand is all over the place – The articles on the front page alone are on a wide variety of subjects – internet marketing, home improvement, where to find free movies, smartphones, etc. The site’s content is all over the place, with no discernible theme or subject other than being vaguely ‘tech-related’. The articles are also pretty poorly written – possibly spun, or at the very least, not written by any kind of native English speaker.

My gut feeling is that visitors are unlikely to trust this site as an authority on anything given the sprawling subject matter and the poor quality content, and as such I find it dubious that a site like this could generate $3K in affiliate commissions.

Most affiliate dollars are generated either through promotions/discounts or reviews. I don’t see any clearly visible discounts/deals on products on this site, and as a visitor I wouldn’t trust the reviews – so where are these magical affiliate dollars coming from?

As an interesting side note, this seller seems to be very eager to setup a screen sharing session on Skype of Teamviewer. Don’t ever let your guard down just because sellers are willing to screen share. Screen shares can definitely be faked if the seller has put a little time/effort into it.

Since I already went over SEMRush, I won’t go over it again. One thing to note about this site in particular is that it seems to generate most of its traffic from India – now, I’m not entirely sure whether this is genuine traffic or bot traffic, but it’s important to know that SEMRush is only works for seeing KWs in certain countries – and since India isn’t on this list, we can’t use this tool to judge whether the site is ranking for any KWs.

I did a quick whois check on the domain, to see if there was anything interesting there.

This whois profile is clearly fake to me (I’m 99% sure that the seller is Indian, given that the site itself targets India and the Seller’s Notes sound like they’re written by someone foreign). One thing of interest to me here is the email listed in the whois – [email protected]

I search techfabia on google to see what comes up, and it turns out there is a techfabia.com (again, no link because I don’t want to give any of these sites links).

This site, techfabia.com, is remarkably similar to the site which is listed on Flippa – there are a number of articles that are about similar topics, and there are even some links pointing back to techifire.com. This suggests to me that the two sites are owned by the same person (you can find out who the owner is pretty easily on this second site, but I don’t want to release anybody’s personal information on this site).

This is another red flag to me – essentially, the seller has two sites which are more or less the same – so they may plan to sell the first site, and then redirect any links that they control to the second site. In this case, even if the first site was a legitimate asset, it would lose a lot of its value in terms of rankings and traffic in the long run due to the lost links.

So, the following are the reasons why I feel this site is suspicious and not worth bidding on

The fact that the site was listed on Flippa two times previously would have been enough to dissuade me from looking further into this site as a potential investment. Add that to the other potential issues that the site has and you have a clear ‘Stay Away’ situation.

Hopefully this quick overview of what to look out for when browsing through Flippa listings proves useful to you.  I hope that it helps you avoid the numerous scammy websites that are up for sale on Flippa and other marketplaces.