Thanks for signing up again!  Let’s get straight to the meat of it – the AuthoritySiteProject’s true identity is… LearnU.org!  Go check it out, and then come back here for the numbers.

If you haven’t been following along with the case study, here are all posts in order:

The First Post of the Case Study (Due Diligence and Validation)

The Second Post of the Case Study (Monetization Strategies)

The Sixth Post of the Case Study (Contributor Accounts)

The Seventh Post of the Case Study (Social Media Optimization)

As you know, we bought a 66% share of LearnU for 25x it’s monthly net income.  Here’s a breakdown of it’s revenue sources:

As you can see, Kindle books are the main revenue source.  The sale includes a collection of 5 Kindle books, 3 of which are earners (the 3 that Perrin wrote).  Here’s a breakdown of the books and their recent sales data:

The project is actually kind of two businesses in 1, as it comes with an established site with some traffic, and 5 established eBooks with traffic and  sales.  So I’ll go over each section individually:

We based our valuation off the entire history of the project, which was over 9 months (excluding November since it was the launch month).  Here are the month-by-month numbers since inception: 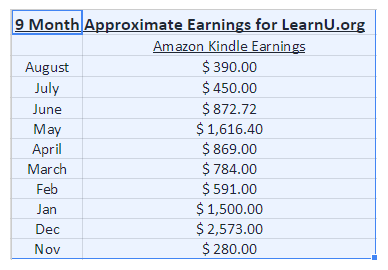 The sales numbers for July and August dipped quite a bit, I believe this to be mostly seasonal as it is the weakest time for College students (summer vacation).   That being said, there was also a structural change – on July 1st Amazon updated the way they calculate earnings for Kindle authors that take part in the Kindle Unlimited revenue share.

Kindle Unlimited (KU) is a program that allows users to get access to unlimited books for free at $9.99 a month. Kindle Authors have the choice to enter their books into this program – in exchange, they receive payment based on how many people read their books.

Previously, authors were paid per book download for the KU program. In July, instead of paying per download, they started paying based on pages read.  This is called KENP (Kindle Edition Normalized Pages).  Because the books in our library are comparatively short, this change did negatively affect sales. We went from about $200 in Kindle Unlimited earnings in July to about $30 in August. Based on the number of book purchases in August compared to July, we would have expected about $130 in Kindle Unlimited downloads if the old system had remained in place. There’s a possibility that this ~$100 drop in Kindle earnings a month will be permanent, but we’ll see.

We should note that it is fairly rare to find established author profiles and Kindle libraries that are for sale since many books are tied to an actual person. In Spencer’s case, he was wise enough to create a persona.

Untapped Potential with the Kindle Library

There are a couple things I’d like to experiment with that Spencer hasn’t yet gotten to.

Treating the Kindle library as lead-gen.

My guess is that between the Kinde Unlimited and the direct sales, he’s getting over 500 people/mo downloading the books.  With strong lead magnets, I think we could get 50-100 leads/mo through this (at the moment he gets very little as there is no real actionable lead magnet).  These leads could easily be worth a $5-10 each if we did sell a course.

Experimenting with promotion and pricing

He’s also not really experimented with promotion or pricing (aside from when a new book launches, which explains some of his stronger months). We’re not Kindle experts by any stretch, but we will be playing with things like book descriptions and promotional strategies to see if we can boost sales.

Based on all the above, we feel like a 20x multiple would be fair.  25x would’ve been fine if it weren’t for the dip in sales in recent months. We used an average of 9 months earnings (we deliberately excluded November as that was the ‘launch’ month). At a 20x multiple, this values the Kindle library at $21,436, and a 66% share at $14,147.

The site gets about 5800 sessions per month, almost entirely from search.  Here’s the landing pages for the past 30 days:

The site has a list of 4840 subscribers, spread out across 5 different segments.  There is currently no funnel.  I guess the process was just incomplete – but at the moment the user just receives the first message with the lead magnets and that’s it.

Here’s a description of the lists in aweber:

Essay eBook – This list is just manual leads opted in from buyers and reader of the Kindle book (nothing to do with the site – there is a call to action within the book, and the reader signs up).  It has 253 total subscribers, 9 of which signed up in the last 30 days..

Learn UStudy Skills – There are the popups on LearnU itself (the HelloBar style banner, and the popup).  It has 1085 subscribers, 20 signed up in the last 30 days.

There is another list of 2938 subscribers that was an experiment on another site aimed towards students that Spencer owns.  He was gathering leads from it and putting them on the LearnU.org email list, promoting a list of the best apps for college students.  In the last 30 days he has received 361 optins.  We are welcome to that list, and he will leave it up for a while so we can experiment with it to see if we can make a profitable campaign there and pay him an advertising fee.

This is by far the largest list, as in the past 30 days the actual LearnU lists have received 35 email signups.   Like his other lists, it just delivers the lead magnet but has no actual sequence and is therefore not selling anything.

Overall, it is hard to say how valuable the existing lists are, since they haven’t been marketed to since May 2015.

The site earns the project money through advertising (Adsense and Amazon).  It has Amazon Affiliate links to its Kindle books on it’s sidebar, but after going through the reports, I don’t think these links get any sales.  The actual products sold through the affiliate link seem to be based on ranking pages.  IE: http://www.learnu.org/get-comfy-with-a-list-of-dorm-room-bedding-for-girls/

Valuation Summary of the Site

The site itself only made $21 if you average out based on the previous 9 months earnings.  In this case we don’t believe the earnings are that relevant – we’d approach this site using an asset-based valuation (site-age, domain name, link profile, traffic, email lists, development and content all carry some value) rather than a valuation based on an earnings multiple.

Generally speaking, you can buy a site like this for about 3k fairly easily.  It’s exactly the type of site I recommend new buyers to purchase, as it has content ranking and a generic, flexible domain name.  This allows you to skip the sandbox and get quick feedback.

The Strategic Aspect of This Transaction

The final decision that came into this purchase was a strategic one, and was based on the promotion of this blog.  Spencer is a pretty major player in this space, and he has a loyal audience interested in the development of this project.  The fact that he will continue case studying the project carries value for us, as we have a new blog in need of promotion.  This is also the reason we’ll focus on making improvements on the site itself rather than the kindle library, despite its valuation representing only about 15% of the total purchase price.

We’ve done this multiple times with sites of this size, and we think this aligns perfectly with the NichePursuits skill-set, so we’re excited to case study it in public.

Finally, Spencer’s popularity also allows us to attract talented people to work with for free, in exchange for the promotion (you’ll find out who in future weeks).

We negotiated a couple bonuses as well:

Continued access to the external list – this is generating 350+ new emails leads per month, so it’s quite valuable.

Re-launching the books – Perrin will be relaunching each of the books for us, which should give us a nice little boost in revenue.

Valuation of the Authority Site Overall

Using an asset based valuation and comparable sites that we see on Flippa and from brokers, we valued the 66% of the site itself (LearnU.org) at $2000.

But between Hayden and I, we actually ended up paying approximately $19000. So why the gap in valuation?

If we were valuing the site in a vacuum, then we’ve probably overpaid for the project by about $3,000. However, as we mentioned already, there are a number of big-picture strategic advantages that we get if we bought this site versus any other site.

The first and most obvious advantage is that there’s probably still significant interest in the Authority Site Project – and we anticipate that a lot of this interest will carry over to what we’re doing with the site. This has value to us, but in particularly it is valuable to the site that you’re on right now – WiredInvestors – which is a relatively new blog that would benefit greatly from exposure on NichePursuits.

Another strategic advantage is that we intend to bring in experts to help lighten the workload. We’ll be discussing this a little more over the coming weeks, but suffice it to say that people are much more likely to be willing to help us if they can get featured on NichePursuits.

Spencer also threw in a couple of bonuses, which we also mentioned already. We believe that the strategic side of this acquisition plus the bonuses makes up that valuation gap that we see (between the $16147 that we worked out and the $19000 we ended up paying).

So, that’s all we have on Valuation. We plan to send out an email early next week where we’ll share detailed plans of what we hope to achieve with the site. Broadly speaking, we have two plans in place – one that will follow the Pareto Portfolio methodology, and one that will use the Monetization Overhaul method. Stay tuned for the next chapter of the Authority Site Overhaul Case Study.